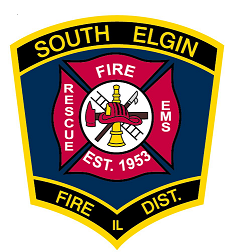 Water Rescue Search and Recovery For almost four decades, the South Elgin & Countryside Fire Protection District (SECFPD) has been in operation serving locally and providing support to surrounding communities in public safety water rescue, evidence searching, and recovery. The SECFPD Water Rescue Team started in 1982 as a way to respond to civilian assistance and rescue in the Fox River, creeks, ponds and small lakes located within district boundaries. With only a membership of two initially, equipment was owned by one member while the district provided equipment for the other. As the SECFPD grew into an all-hazards rescue service, the water rescue team grew with it. Currently, the district owns and operates two rescue boats and a water rescue response vehicle. The current South Elgin Water Rescue Team is made up of six Public Safety Dive Technicians and seven Swift Water Rescue Technicians. Locally, South Elgin participates with other MABAS Division 2 Water Rescue Teams for training and emergency responses in the Northern Kane County area. South Elgin also participates in the Statewide MABAS Water Rescue Team, which can be deployed anywhere in the state of Illinois or the continental Unites States if necessary.

As the duties of the SECFPD Water Rescue Team expand, so too has the demand to evolve our technology, training and protocols. Our mission, however, remains constant: To provide the highest quality service to the citizens of the South Elgin & Countryside Fire Protection District and surrounding mutual aid departments.